The Football Association protests against FIFA's ban in Qatar 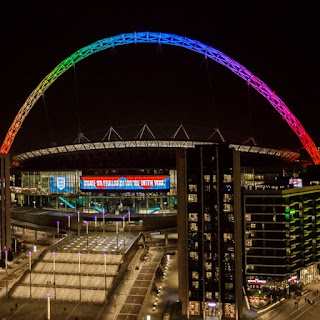 The Football Association (FA) has showed their support for the LGBTQ community by lighting up the famous Wembley arch in rainbow colours during England's World Cup game against the United States of America.

The gesture was made after FIFA banned players from wearing the "OneLove" armband at the World Cup in Qatar.

"Attempting to eradicate discrimination of any kind, including homophobia, from football is something which everyone at The FA believes in strongly and have looked to support for a number of years," the FA said.

FIFA told to participating nations they can't show on their armbands the symbol of "OneLove" at World Cup in Qatar.