My policeman with Harry Styles is streaming 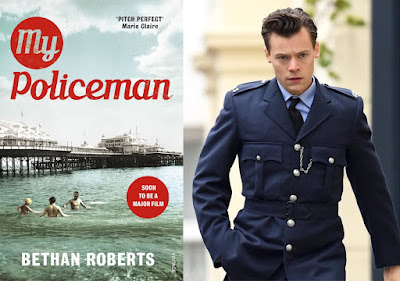 My Policeman is a 2022 British romantic drama film based on the 2012 novel of the same name by Bethan Roberts and directed by Michael Grandage. The film stars Harry Styles, Emma Corrin, Gina McKee, Linus Roache, David Dawson, and Rupert Everett.

Set in 1950s Brighton, a gay policeman, Tom Burgess, marries schoolteacher Marion Taylor while being in a relationship with Patrick Hazlewood, a museum curator. The secret they share threatens to ruin them all.

The film toggles between past and present, with pop star Harry Styles as the young Tom Burgess, a Brighton policeman discovering his identity at a time in England when queerness was criminalized and LGBTQ people were routinely jailed.

Rupert Everett, who is gay and played gay as far back as Another Country in 1984 before becoming widely known for playing Julia Roberts’s fabulous pal in My Best Friend’s Wedding, plays Patrick in the present.

The film, which is already streaming, received mixed reviews from critics. A majority of critics praised Dawson's performance while the reviews were more mixed on the performances of Styles and Corrin, with a majority criticising the film's direction and screenplay.