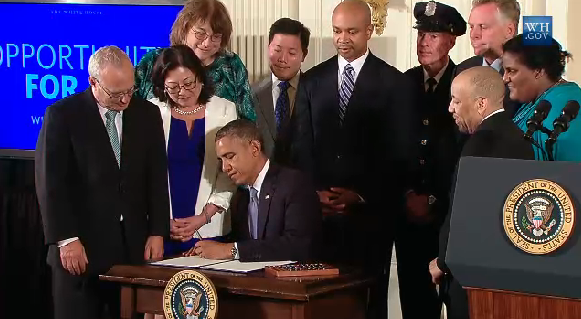 President Obama today has signed a new executive order that prohibits federal contractors from discriminating on the basis of sexual orientation and gender identity.

"No current federal law adequately protects lesbian, gay, bisexual, and transgender (LGBT) workers from employment discrimination. This is both contrary to our values as Americans, and bad for business", a White House official said.

The official added the change for federal contracting will impact some 24,000 companies with 28 million workers, or one-fifth of the U.S. workforce. Many large federal contractors already have employment policies barring anti-gay workplace discrimination, as do 21 states. However, the Williams Institute at UCLA Law School estimates that the executive order would extend protections to about 14 million workers whose employers or states currently do not have such nondiscrimination policies.

A poll conducted last fall by Republican pollster Alex Lundry showed that more than two-thirds of registered voters, including 56 percent of Republicans, support the protections of the Employment Non-Discrimination Act.