GALLUP: Near 1 million of same-sex couples in the U.S. 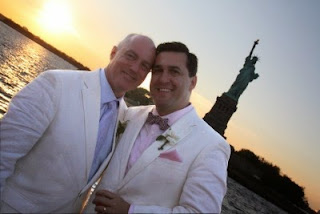 Via GALLUP:

"Approximately 0.3% of adults in the U.S. are married to a same-sex spouse, and another 0.5% identify as being in a same-sex domestic partnership. In examining the total population of 243 million U.S. adults, these survey estimates suggest nearly 2 million adults are part of a same-sex couple, of whom 780,000 are married.
These data are based on 80,568 interviews conducted on Gallup Daily tracking from Jan. 28-April 19, 2015. Overall, approximately 0.3% of all respondents during this time period both identified as lesbian, gay, bisexual or transgender (LGBT) and said they were married, and in a follow-up question, they indicated that they were married to a same-sex spouse. An additional 0.5% of adults identified as LGBT and reported being in a same-sex domestic partnership.
The 780,000 American adults who are estimated to be married to a same-sex spouse translates into approximately 390,000 same-sex married couples in the U.S. Similarly, the estimated 1.2 million adults living in a same-sex domestic partnership translates into 600,000 domestic partnership couples. Thus, there is a total of almost a million same-sex couples in the country, of which nearly four in 10 (39%) are married.
At 990,000, Gallup’s estimated number of same-sex married or domestic partner couples in the U.S. is significantly higher than past estimates derived from the U.S. Census Bureau’s American Community Survey (ACS), which in 2013 put the number of same-sex couples at roughly 727,000.
Of this group, more than 250,000 reported they were married. The Census Bureau, however, has cautioned that the ACS estimates of married same-sex couples may not be reliable as they have determined that a large portion of recorded married same-sex couples may actually be married heterosexual couples who miscoded the sex of one of the spouses.
And while the right-wingnuts are grasping at the 0.3% number forgetting that many states don’t allow same-sex marriage and not everyone wants to get married  It doesn’t matter even if it is only 0.3%. The Declaration of Independence doesn’t say 99.7% of men are created equal." 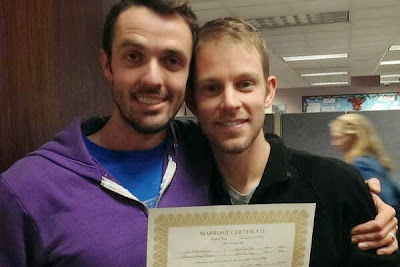 A recent survey shows near 60% of Americans
support gay marriage