"I am your father", the new real life Campbell's campaign 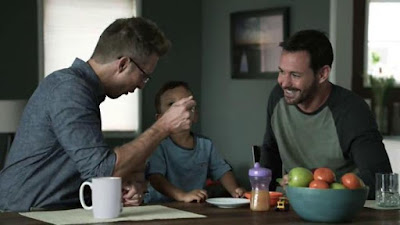 A new ad from Campbell’s Soup features a real same-sex couple with their young son. Larry Sullivan and David Monahan and their adorable son, Cooper, are among the many real-life families featured in a new Campbell's Soup campaign.

The ad is part of the company’s "Made for Real, Real Life" campaign. It is titled “Your Fathers”, and it is for the soup’s Star Wars line, and it features the two reciting the famous Star Wars line: “I am your father”.

Yin Woon Rani, Campbell's vice president of marketing activation said: "This campaign holds a mirror up to the modern American family, because we know that people respond to brands that understand them and show life how it is".

Days after Campbell's Soup unveiled the new commercial featuring gay dads, a right-wing group slammed the ad for "normalizing sin". In a post on its website, One Million Moms, which is a division of the American Family Association, argued that Campbell's Soup is "glorifying unnatural marriage" with the clip, and they ask their followers to call Campbell to complain.

Have we to remember them that same-sex marriage is legal in all U.S.?

I think it's time to turn the tables and call or write Campbell's to thank them for the ad, and urge them to not pull it down.

Watch the ad in full below and decide.