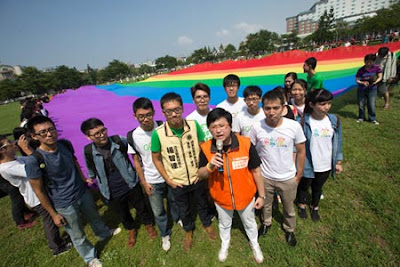 The 100kg, 60-meter by 30-meter rainbow flag, was unfurled in a field in front of the Tainan City Hall. The massive flag was a gift from Taiwanese pop diva A-mei, a staunch supporter of same-sex marriage and LGBT rights.

The display is a highlight of the Taiwan Alliance to Promote Civil Partnership Rights group’s 28-day tour around Taiwan to drum up support for the same-sex marriage bill which cleared its first reading in the Legislative Yuan in 2013.

Head of the alliance Hsu Hsiu-wen called on LGBTs in Taiwan to vote and weigh in on the legislative elections next year.

Hsu, who is lesbian, is a lawyer and legislator-at-large candidate for the political alliance between Taiwan’s Green Party and Social Democratic Party. She further called on gay and lesbian voters to support her and other openly gay legislative candidates next year.