Ad banned for being "too gay" 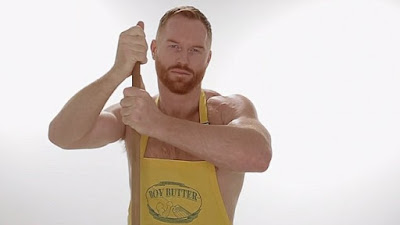 The spot was designed to air during the broadcast of RuPaul’s Drag Race in major markets like New York, LA and San Diego.

But appears the ad won't make it to air in Chicago, since, according to Boy Butter, Comcast thinks the ad is literally "too gay".

The makers of Boy Butter have spoken of their disappointment after their ad was pulled from cable TV in Chicago. Eyal Feldman, who founded the company, claimed ComCast TV: "I did not think [Chicago] viewers could handle the level of gayness in this ad starring sexy ginger, Seth Fornea, who is showing us all how to properly use a butter churn.

Watch and judge for yourself.

Boy Butter ad banned for being too gay

Email ThisBlogThis!Share to TwitterShare to FacebookShare to Pinterest
Label: LGBT Videos, My blog and fellow blogs