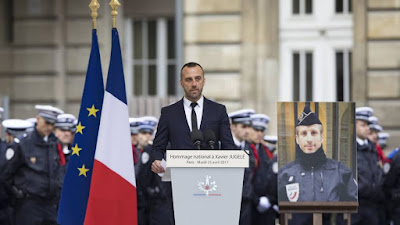 French President Francois Hollande and France’s top officials and presidential candidates attended a national ceremony to honor the Paris police officer killed by an Islamic extremist on the Champs-Elysees.

The police officer, Xavier Jugelé, was shot to death last week when an assailant opened fire with an assault rifle on a police van parked on the most famous avenue in the French capital. Two other officers were wounded.

Xavier, who was in a civil union with his partner, was a proud defender of gay rights, and a member of FLAG, a French association for lesbian, gay, bisexual and transgender police officers.

After his death, flags at police stations across France flew at half-mast, and President  Hollande made him a posthumous knight of the Legion d’Honneur.

Besides, at the memorial ceremony, Xavier’s husband, Etienne Cardiles, paid loving tribute to his late partner with a brief statement.

“This pain makes me feel closer to your comrades who suffer in silence like you and me,” Cardiles said. “I have no hatred, Xavier, because it is not like you and does not fit with what made your heart beat. Nor what made you a guardian of the peace”, he added.