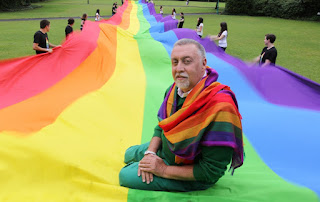 Gilbert Baker, 65, an artist based in San Francisco who created the rainbow flag as a symbol for the gay community, has died in his sleep at his home in New York

Baker, who was born in Kansas in 1951, was stationed in San Francisco in the early 1970s while serving in the US Army, at the start of the gay rights movement.

Activist and artist, he began making banners for gay rights and anti-war protests in the 1970s, often at the request of Harvey Milk.

He initially designed an eight-colour flag in 1978 for the city's gay freedom day, the precursor to the modern pride parade. Baker said he wanted to convey the idea of diversity and inclusion, using "something from nature to represent that our sexuality is a human right".

It would later be reduced to six stripes, removing pink and indigo, and swapping blue for turquoise.

In 2015, New York's Museum of Modern Art acquired the flag for its design collection, calling it a powerful design milestone. "I decided that we should have a flag, that a flag fit us as a symbol, that we are a people, a tribe if you will", Baker told in an interview. "And flags are about proclaiming power, so it's very appropriate", he added.