U.S. Ambassador to the U.N. condemns attacks on gay men in Chechnya 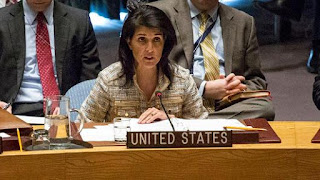 Nikki Halley, the U.S. Ambassador to the United Nations, has condemned the violent attacks on gay men denounced in the southern Russian republic of Chechnya, and urges to Chechen authorities to investigate and end them.

According to credible sources inside the country, over a hundred men suspected of being gay are being abducted, tortured and even killed by Chechen police in a former military headquarters in the city of Argun. It would be the first concentration camp for gays since Hitler's times.

“We continue to be disturbed by reports of kidnapping, torture, and murder of people in Chechnya based on their sexual orientation and those persecuted by association. If true, this violation of human rights cannot be ignored – Chechen authorities must immediately investigate these allegations, hold anyone involved accountable, and take steps to prevent future abuses.

We are against all forms of discrimination, including against people based on sexual orientation. When left unchecked, discrimination and human rights abuses can lead to destabilization and conflict.

Tomorrow, the United States will lead a first-ever meeting on human rights in international conflicts in the U.N. Security Council to underscore our commitment to addressing human rights abuses wherever they threaten international peace and security”.

You can sign the Amnesty International's petition to stop abducting and killing gay people in Chechnya here.