Just parents who love their children 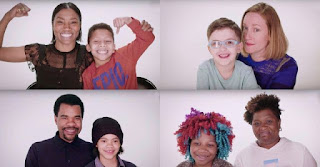 This gorgeous short video from The Scene series shows parents of trans children showering their kids in positive words and unconditional love.

According to a study, trans youth with accepting parents are three times less likely to have depression, they reported having high self-esteem at nearly five times the rate of kids who aren’t accepted by their families, and they are more than 14 times less likely to attempt suicide.

It’s amazing what the power of love can do.

Check the video below, it's awesome!