53 men arrested in Nigeria for celebrating a gay wedding

This week 53 men have been arrested in Nigeria for celebrating a same-sex wedding.

Nigerian police confirmed they arrested the group of young men for “belonging to a gang of unlawful society”.

The men were arrested in the northern city of Zaria during a celebration to mark to wedding of a same-sex couple, prosecuting officer Mannir Nasir told a court.

A defence lawyer for the group said most of the accused were students and that they had been illegally detained by the authorities for more than 24 hours.

Same-sex marriage is banned in Nigeria and it is a criminal offence to perform or witness a gay wedding ceremony.

In 2013, Nigeria's House of Representative voted a bill to criminalise and punish with prison gay marriage, same-sex relationships and even membership of a LGBT rights groups.

Early 2014, Nigerian President Goodluck Jonathan signed into law the bill, which bans same-sex marriage and public displays of homosexuality and relationships, as well as LGBT organizations and groups. 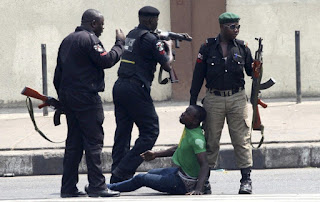