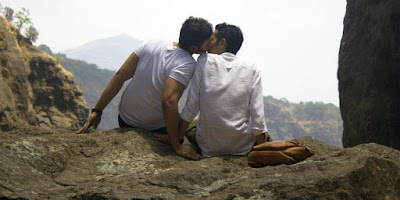 More than a year after it was made, Sudhanshu Saria's debut feature film Loev (2015) was released on Netflix last week. This means viewers in India can finally watch it without the censor board, and other assorted moral custodians, coming in their way.

Loev, which had its world premiere at Estonia's Tallinn Black Nights Film Festival in November 2015, was selected at Austin's prestigious South By Southwest Film (SXSW) Festival in 2016. The film's Indian premiere took place in October last year at the 18th Mumbai Film Festival, but it didn't have a commercial release.

In spite of its critical acclaim abroad, Loev is unlikely to be commercially shown in Indian theatres, at least not without significant cuts. For, like its oddly spelled title, Loev is an unconventional love story involving three men, one that is illegitimate in the eyes of the Indian State.

The film opens with Sahil (beautifully played by the late Dhruv Ganesh) struggling to pack in the darkness of the flat he shares with his flamboyant partner, Alex (Siddharth Menon). Brazenly irresponsible, and just as charming, Alex has forgotten to pay the electricity bill. A familiar squabble follows, and even without a hint of physical intimacy, Saria establishes a chemistry between the two men.

The real drama, however, unfolds when Sahil meets his old friend Jai (Shiv Pandit), a wealthy Wall Street broker who is on a business trip to Mumbai. The two take off on a brief holiday to Mahabaleshwar, where, in the course of 48 hours, they confront a repressed intensity in their relationship. By the time they've got back to Mumbai, their dynamics have acquired a fevered pitch.

Apart from the riveting performance of its cast, Loev stands out for its sharp focus on the inner turmoil of its characters, instead of putting a premium on their sexual orientation or Section 377 of the Indian Penal Code that criminalises their desire. By the time the sexuality of the protagonists is manifested physically, the viewer is too absorbed in their humanity and the pathos of their stories to register it as anything other than organic and seamless.