May 17: International Day Against Homophobia & Transphobia 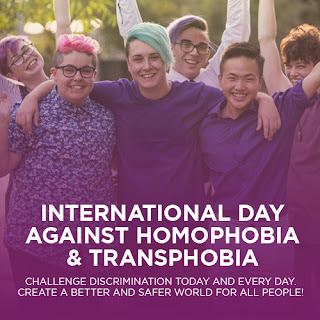 Today is the International Day Against Homophobia and Transphobia (IDAHOT).

It is marked as International Day because it was on May 17, in 1993, when the World Health Organization removed homosexuality from its list of mental illnesses.

The International Day was created in 2004 to draw the attention of authorities, opinion leaders, media and public to the alarming situation faced by LGBT people around the world.

Unfortunately, there are over 70 countries where it is a criminal offence to be homosexual, and in seven of these countries the punishment could be death. This International Day aims to raise awareness of homophobia and campaign against it.

IDAHOT 2017 will focus on “Families”. This focus includes both the respect of the rights of LGBT families and the role of  families in the well-being of their LGBT members.