Some 2,000 people joined a gay pride march in the Romanian capital of Bucharest on Saturday, demanding greater rights.

The gay pride march, now in its 13th year in Romania, comes after lawmakers approved an initiative that could amend Romania’s constitution to explicitly state that marriage is a union between a man and woman. The wording now is a union between “spouses”.

Participants also held a minute of silence as they passed the Russian Embassy in solidarity with gays in Chechnya, where dozens have been detained and tortured.

Some 30 ambassadors expressed support for the march and for protecting the rights of the LGBT community, included the US Ambassador Hans G. Klemm who was among those taking part.

After fully decriminalizing homosexuality in 2001, Romania has made major progress on LGBT rights, passing extensive anti-discrimination and hate-crime laws, and equalizing the age of consent. Although in the last ILGA's list about LGBT-friendly countries in Europe, Romania is the 35 country of 49, with only 21% of acceptance. 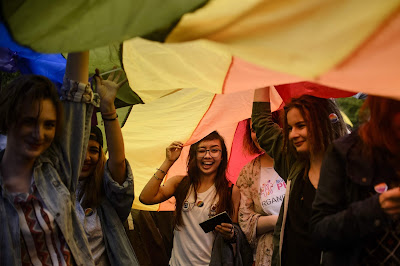 Despite the pouring rain, people marched without failing