Canada will apologise for LGBT discrimination in the past 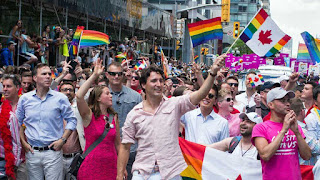 The Canadian government will formally apologise for historic discrimination committed against LGBT Canadians.

Trudeau wrote: “On November 28, the Government will offer a formal apology to LGBTQ2 Canadians in the House – for the persecution & injustices they have suffered, and to advance together on the path to equality & inclusion”.

The apology will be given to the hundreds of LGBT Canadians who were discharged from the military or fired from the civil service. A programme to root out gay and lesbian people was carried out until the late 80s, because it was a thought they posed a threat to national security. Authorities used a creation called the Fruit Machine to supposedly identify homosexual people.

Earlier this year Justin Trudeau vowed to tackle historic LGBT injustices, saying: “Our government believes in equality and equal treatment for all Canadians. That is why we are moving forward on legislation that makes it possible to erase the convictions of Canadians who were unjustly convicted of a crime, simply for who they were, or who they loved”.

Thanks Mr. Trudeau! Thanks Canada!