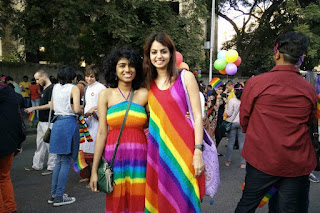 Hundreds of LGBT people, activists and allies marched in the streets of New Delhi on Sunday. Despite gay sex still being illegal in India, this marks New Delhi’s 10th annual Queer Pride march.

The crowd sang, danced and celebrated as people from all walks of life, identifying with different sexual orientations and genders got together at Delhi’s Barakhamba metro station to march till Jantar Mantar.

This historic protest-cum-celebration represents a milestone ten years of collective struggle to battle all forms of shame, stigma, transphobia, homophobia, and socio-economic hierarchy, at a time when such an assertion of dignity and self-respect grows in need and vitality, said the community’s manifesto.

One of the organizers of the event, Manak Matiyani, recognizes his wealth and education privileges that allow him to live openly as a gay man in India. He notes, however, that not everyone is so lucky. "We’re fighting for the right of everybody in this country to live as an equal citizen, which means that everybody should be able to live their life the way they want to", he said.

According to Indian law, gay sex is punishable by up to 10 years in prison. Besides, this law is often abused by police and community leaders to threaten people or extort money from them.

In 2009, the New Delhi court declared the law unconstitutional. Yet, this ruling was overturned four years later. Last year, the court said they’d reconsider this decision. 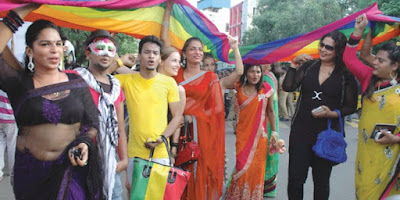 LGBT community demands equality and the end of discrimination