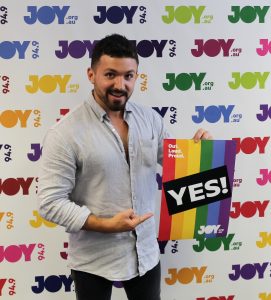 Alfie Arcuri, who became the first openly gay contestant to win The Voice Australia, has written an emotional anthem to help support the marriage equality vote.

“The time has come for our voices to be heard”, Alfie said. “This is much greater than just marriage, this is about acceptance and human rights”, he added.

The message of the song Love is Love urges Australians to see the world through a child’s eyes where equality and love reigns.

The former architect also recalled the moment his grandmother voted yes in the recent vote for Marriage Equality in Australia. “It was a very emotional moment for me when my nonna voted yes ­ particularly knowing how much she struggled in the beginning with my sexuality”, Alfie said.

Polls suggested that most of Australians intend to vote in favour of same-sex marriage.