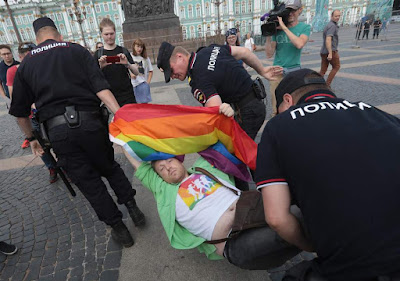 Organisers had said they would stage one-man protests to demand freedom of association after city authorities turned down their request to hold a parade.

A few dozen activists gathered at Palace Square in defiance of a ban on holding the rally.

Police detained campaigners who unfurled rainbow flags or held placards, dragging them into a police bus.

Russia passed a law in 2013 banning the spreading of gay “propaganda” to harass and intimidate LGBT activists into silence.