One year with no news from Zelim Bakaev 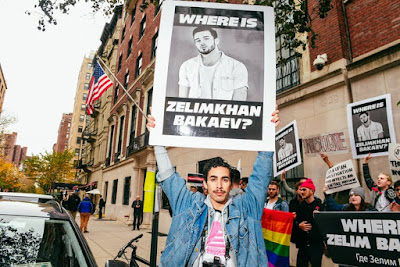 A year since the disappearance of Chechen gay singer Zelim Bakaev, his family, fans and activists are still searching for answers about what happened to him.

Zelim was last seen being dragged into a car in the streets of the Chechen capital Grozny, where he had gone to attend his sister’s wedding last year, on August 8. No one has heard or seen him since.

﻿Chechen refugees of the LGBT World Beside organisation held a small rally outside the Russian embassy in Belgium in his honor.

“We demand the resolution of an international independent investigation by an international human rights organisation. We do not forget and see what is happening in Chechnya,” they wrote in a statement.

Human rights activists have long been demanding an investigation into Zelim’s disappearance, which has yet to be launched as authorities in both Chechnya and Russia have dismissed reports of a purge targeting gay men in the Chechen republic.

Zelim’s mother has pleaded for answers, but nothing has been done. Not for him or any of the other victims of the gay purge in Chechnya.

Chechen authorities denied these accusations, going so far as to deny the very existence of LGBT people in Chechnya. Nonetheless, there have been numerous verified reports of secret prisons, torture and possibly as many as 20 men have been killed.