A Moment in the Reeds 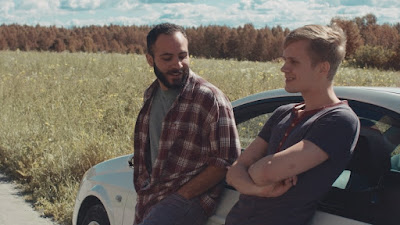 A Moment in the Reeds is a Finnish romantic drama film written and directed by Mikko Mäkelä in his feature directorial debut. It stars Janne Puustinen (Leevi) and Boodi Kabbani (Tareq).

Leevi returns to Finland from his university studies in Paris to spend the summer helping his father Jouko renovate the family lakehouse for sale. Leevi is estranged from his conservative father, his only living relative, and hopes to avoid mandatory military service by obtaining French citizenship.

Tareq, an architect by profession who has come to Finland from war-torn Syria seeking asylum, has been hired to help with the work. When Leevi's father returns to town on business, the two young men, speaking English, their only common language, establish a connection. They spend a few days discovering one another during an idyllic Finnish midsummer.

The film also talks about the experience of being marginalised in western societies not only from the point of view of sexual orientation, but also of ethnicity, nationality or language.

This story is set in Finland but, in fact, it may find resonance in any country with debates over immigration and over the intake of refugees.

The film had its world premiere at BFI London Film Festival.