A positive response to fake gay marriage proposals in Poland 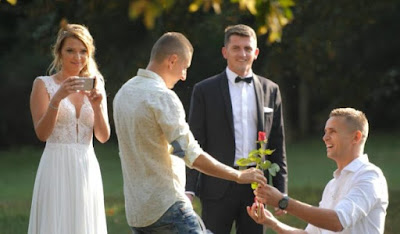 Polish gay couple Jakub Kwieciński and David Mycek, who got married in Portugal in 2017, asked passersby to film their fake wedding proposals on the streets of Warsaw.

In the video, one of the couple asks a member of the public, who isn’t aware that it is a same-sex proposal, to film the moment. The bystander only finds out that they are filming a gay proposal when the other half of the couple appears.

The response is mostly positive, with passersby taking photos, wishing them good luck and congratulating them. At one point, when the gay couple propose in Szembek Square, they are met with applause and bystanders shake their hands.

However, they also include a few incidents of discrimination in the video, which they have uploaded on YouTube.