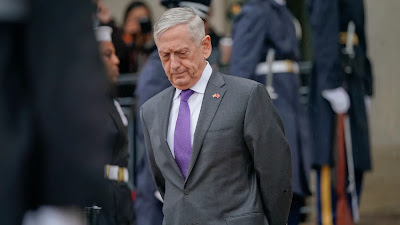 Defense Secretary Jim Mattis has resigned. The Pentagon chief, nicknamed “Mad Dog Mattis” during his time as a Marine, has sent a resignation letter addressed to Trump indicating his final day in office will be Feb. 28.

The retired general had split with the president on several issues including torture, Syria's war, relationships with Russia and China, and also transgender service members.

In 2017, Trump ordered to the Pentagon to implement a new administration ban on transgender people in the military, issuing a policy to clean military of trans soldiers.

Mattis said in a statement: “Once the panel reports its recommendations and following my consultation with the secretary of Homeland Security, I will provide my advice to the president concerning implementation of his policy direction. In the interim, current policy with respect to currently serving members will remain in place”.