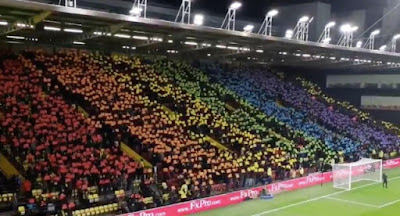 Watford FC's fan group Proud Hornets made an enormous LGBT Pride flag in the stands during their club’s Premier League match against the champions, Manchester City.

This gesture was inspired by Stonewall’s Rainbow Laces campaign, which has been marked by the majority of clubs in the Premier League in recent weeks.

Another Angle's video looks back at an incredible rainbow display put on by the Proud Hornets and The 1881 Movement ahead of Premier League game against Manchester City.

There's a fascinating insight into the preparation that goes into the creation of the display, which was part of the activation period by Stonewall for LGBT inclusion in sport.