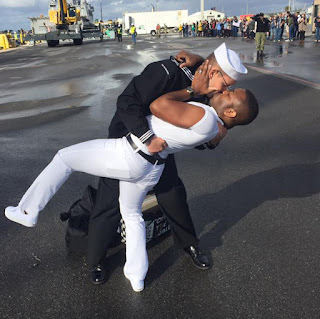 Bryan Woodington returned home after seven months deployment in the Middle East, and was seen kissing his husband Kenneth Woodington in spectacular style.

The couple participated in the ceremonial “first kiss,” a tradition in which one Naval service member and their spouse kiss and embrace to mark a unit’s return from overseas deployment.

Bryan, a sailor aboard the USS The Sullivans, returned with 300 fellow sailors to Naval Station Mayport in Jacksonville (Florida) just before the Christmas holiday, after spending seven months in the Middle East.

The first kiss is decided by lottery, in which sailors’ spouses donate to a good cause to enter a raffle. Kenneth won, and when Bryan walked off the gangway ahead of his fellow sailors, the two embraced and kissed.

Bryan commenting: “I was excited and I could not wait for it to happen. I knew I was going to dip him.” Kenneth said: “When he got off the ship, I lost all control, I just dropped everything and I just ran.” And Bryan added: “I gave him nothing but love and care and understanding right out the gate, so I think we just fell for each other really hard and we both knew what we really wanted.”

Bill Austin, a spokesman for Naval Station Mayport, reportedly said a same-sex first kiss had happened before and didn’t matter in the Navy, which he said was at the forefront of progress. 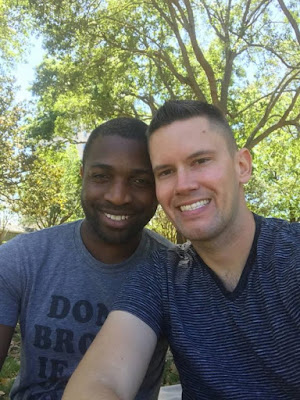 The couple has been married for about a year