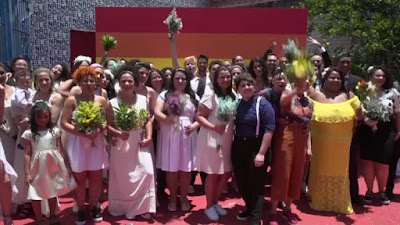 After announcing its intention, it managed to raise around $12,000 to help cover the expenses of the event. A team of volunteers also helped to create dresses, decorate the venue, style hair and prepare food.

Many LGBT people in the South American country are fearful for their rights following the election of the far-right leader Jair Bolsonaro, to the position of President.

Bolsonaro has made numerous homophobic statements, including,"Yes, I’m homophobic and very proud of it". He also once suggested that if parents see their son "acting a little bit gay" they should beat him "to make him normal".

Same-sex marriage has been legal in Brazil since 2013. However, some gay and bisexual people worry that once in office, Bolsonaro may roll back some of their rights.