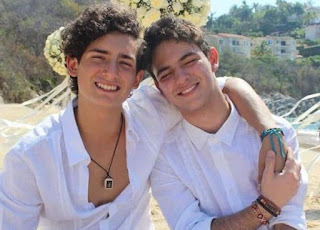 The new show will be in Spanish and is called “El Corazón Nunca Se Equivoca” (The Heart is Never Wrong), and it’s a spinoff of the Mexican telenovela, “Mi Marido Tiene Más Familia,” (My Husband Has More Family).

Viewers will follow the love story of Cuauhtémoc (Joaquín Bondoni) and Aristóteles (Emilio Osorio), the popular couple from “Mi Marido”, better known as ArisTemo. The young men will take on challenges in today’s less than accepting society and face challenges together.

In 2013, Univision made international headlines with a memorable same-sex wedding between two men in “Amores Verdaderos” (True Lovers). And in 2018, even more LGBT characters made their debut in both English and Spanish-language shows, including “One Day at a Time”, “Élite”, “Vida”, “Casa de Las Flores”, and “Amar a Muerte.”

Shows such as “Mi Marido” and hopefully soon too, “El Corazón Nunca Se Equivoca,” show real-life scenarios that people of the Latino LGBT community face on the reg. And this can lead to more acceptance from family members and friends.