Manila Pride more than doubled its record number of attendees 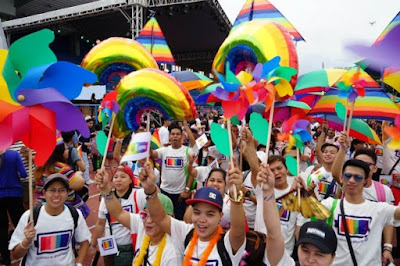 Established in 1994 on the 25-year anniversary of the Stonewall Riots, Metro Manila Pride turned 25 itself this year. Philippines' capital smashed last year's record of 25,000 people, attracting 70,000 this year

In fact, due to the sheer volume of people trying to attend the march, organizers had to shut down the parade. ‘Due to traffic, safety and security we are forced to stop the march,’ Metro Manila Pride tweeted, halfway through the parade.

‘We are not stopping anyone from coming in but because of the volume of people wanting to come in we are doing so by batch.’ They then added: ‘Please be patient and be kind to each other.’

This year’s theme was Resist Together, aiming to shine a spotlight on how far the LGBT rights movement has come both at home and abroad.

The Pride march also seeks to amplify the clamor against the oppression and social injustices faced not only by the LGBT community but also other marginalized sectors at large.