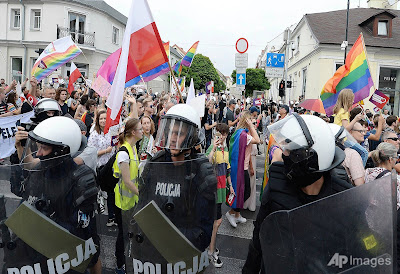 Over 2,500 people took part in a pride parade in the central Polish city of Plock protected by a cordon of armed police, as LGBT rights became a big issue in Catholic Poland ahead of a parliamentary election in October.

Marchers walked through the streets of Plock waving rainbow flags while surrounded by police in riot gear. Politicians, including Robert Biedron, one of Poland’s first openly gay politicians who launched the leftist Wiosna party earlier this year, attended the march.

Hundreds of counter-protesters gathered at the Plock parade and chanted homophobic insults but were blocked from interacting with parade participants by the heavy police presence.

Poland’s ruling Law and Justice (PiS) party has made hostility to gays a central focus of its campaign, depicting LGBT rights as a dangerous foreign idea that undermines traditional values. Critics say PiS has fomented anti-gay sentiment and helped lead the violence against the LGBT community in Poland.

Poland's opposition is divided on whether to address the increased marginalization of the country's LGBTQ community, or to cater to socially conservative voters.

The Polish Catholic Church has also described gay people as a threat, with a top church official recently denouncing what he called a "rainbow plague."

Last month, a pride parade in the city of Bialystok was marred by violence after anti-gay protesters chased people through the streets and beat them.