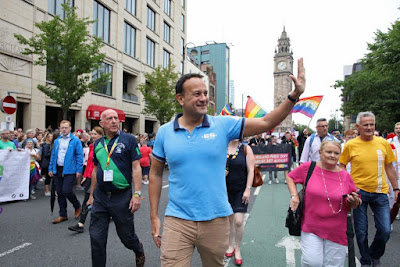 Leo Varadkar, the Prime Minister of the Republic of Ireland made an unannounced visit to Northern Ireland for Belfast’s annual Pride celebrations. The leader was loudly cheered by the crowd in the city.

It is the second time that Varadkar has paid a visit to Belfast Pride, which has never been attended by a UK head of government.

The visit comes at a key time for the country’s LGBT community, with equal marriage set to be extended to Northern Ireland in October, unless a new power-sharing executive is formed beforehand. Northern Ireland-born Labour MP Conor McGinn successfully pushed an amendment through the UK’s Parliament to extend same-sex marriage.

Varadkar sent a non-sectarian message of solidarity to the LGBT community in the city. Addressing the crowd at the event, he said: “I’m glad to be in Belfast. I had a real honour today to walk with Lord Hayward, who along with Conor McGinn put legislation through the Commons and Lords to bring marriage equality here in a few months’ time. What we see today in Belfast is Northern Ireland at its very best. Open, inclusive, diverse, and for everyone. Thank you so much, and happy Pride.”