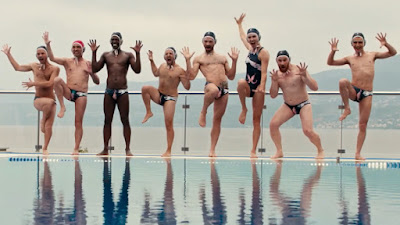 The new hilarious French comedy The Shiny Shrimps ("Les Crevettes pailletées") is set to hit cinemas next month. It is a French sports comedy film, directed by Maxime Govare and Cédric Le Gallo.

Inspired on real events, the film follows Mathias Le Goff (Nicolas Gob), a vice-world swimming champion, who makes a homophobic statement on TV and is disciplined by the national swim team with the responsibility of coaching The Pailletées Shrimp, a gay water polo team who are more motivated by the party than by the competition.

They have only one thing in mind: to qualify for the Gay Games in Croatia where the hottest international LGBT athletes compete. It's the start of a bumpy and joyful ride

Enjoy the trailer below: