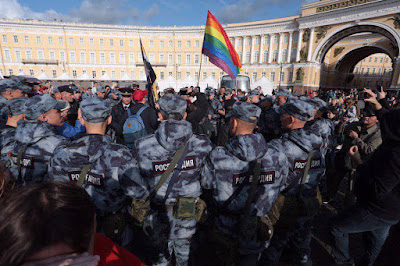 On the eve of August 3, about 50 LGBT activists gathered at Palace Square in St Petersburg. The annual Petersburg Pride was usually held in the format of a series of single pickets and, unfortunately, was traditionally accompanied by detentions. As a result, the LGBT flags fluttered on the square for only half an hour.

It was not the police who prevented the start of the action on time, a shower did not allow LGBT activists to unfold their posters at a pre-arranged time at 17:00. As a result, with a slight delay, the activists began to take turns opening their posters, replacing each other, so as not to violate the rules for conducting a single picket.

The police warned people with posters and rainbow flags that “their actions violate the conduct of a single picket” (in fact, the rainbow flag itself is not prohibited in the Russian Federation, it is not a banner with a slogan and its deployment shouldnot be equated with a picket). In any case, after about half an hour the arrests began.

Within minutes, there were a dozen people in the police wagon. Not only those holding posters or rainbow flags were detained, but also, for example, an activist of the Heterosexuals Alliance and LGBT for Equality, Aleksey Nazarov, who has deployed the Russian tricolor. He tried to explain to the police that it was not an offense to unfold the Russian flag, but still found himself in the paddy wagon.

As a result, the police detained 12 people. Many were beaten in the paddy wagon. This time is much tougher than in previous LGBT protests. Thus, one of the detainees, Daniil Maksimenko, was handcuffed and injured his wrists, which began to bleed. In addition, someone sprayed gas from a pepper spray on the police wagon.

One of the activist said it is important to pay attention to police inaction when it comes to crimes against LGBT people. He explained he and his partner faced threats in the network, physical violence, many times they turned to the police, but in the end there were no results.