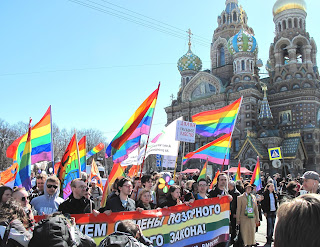 The public march of the annual St Petersburg Pride will be held on August 3. LGBT activists informed the city administration to hold a procession in that date and suggested a route in the center of St Petersburg, around the Ostrovsky Square and the Alexandrinsky Theater.

The motto of the event will be “Live your future today!”, which embodies the desire of LGBT people to live with dignity and happiness nowadays, despite obstacles from the state, officials and public attitudes.

The main goals of St Petersburg Pride 2019 include the requirement to respect the right of assembly and the inadmissibility of the broad interpretation of the Administrative Code for the prohibition of public events in accordance with the last decision of the Russian Constitutional Court.

Despite the prohibitions of marches, since 2010, a public action took place in one way or another for St Petersburg Pride. In 2013, 2014 and 2017, the LGBT-Pride was held in a rally format on the Mars Field in St Petersburg without noticeable consequences for the “degeneration of humanity”, as one of the former governors of the city, Valentina Matvienko, said before.

Pride coordinators Yuri Gavrikov and Alexei Nazarov said the experience of holding the St Petersburg Pride since 2010, contrary to the criterion of the local administration, shows a systemic discrimination and the factual ban on the right of assembly.

“They want to deprive us of any act in the public space, many murders of LGBT people are being hushed up or not being investigated, and illegal dismissals occur. But many of us want to live our future today, building our lives without waiting. The fact is the country is being changed by people, not by officials”, activists said. 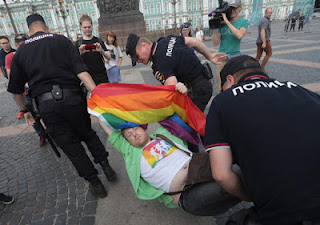