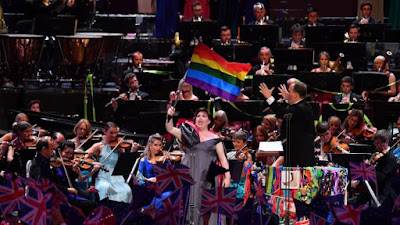 The mezzo-soprano Jamie Barton waved a rainbow flag during her rendition of Rule Britannia at the Last Night of the Proms to show her support for LGBT rights.

Barton was making her first appearance at the Proms and had said that it was “important for me to stand up proudly as a bisexual woman”.

As well as Rule Britannia, one of the highlights of the Last Night at the Royal Albert Hall, she sang Somewhere over the Rainbow, from The Wizard of Oz, and George Gershwin’s I Got Rhythm.

The American singer, who took to the stage waving a Pride flag, said her mission was to "unify the audience". And, with a sensuous reading of Bizet's Habañera and a wistful Somewhere Over The Rainbow, she achieved her goal.

Barton, who revealed her bisexuality on Twitter on National Coming Out Day 2014, said she wanted to use the Proms to make a very clear statement of Pride.