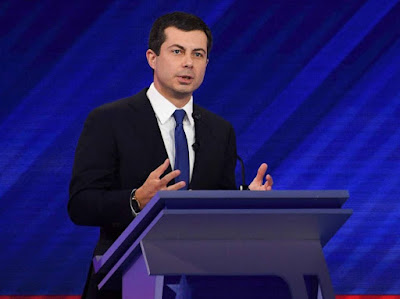 Pete Buttigieg’s closing statement at the Democratic presidential debate was historic as he candidly told the story of his coming out in response to a question about resilience.

It came at the tail end, after moderator asked each candidate on stage to discuss how they have demonstrated resilience. Buttigieg discussed the fears he faced about coming out as gay while serving as mayor of South Bend, Indiana, in 2015.

“As a military officer serving under ‘don't ask, don't tell,’ and as an elected official in the state of Indiana when Mike Pence was governor, at a certain point, when it came to professional setbacks, I had to wonder whether just acknowledging who I was was going to be the ultimate career-ending professional setback,” Buttigieg acknowledged.

“I came back from the deployment and realized that you only get to live one life. And I was not interested in not knowing what it was like to be in love any longer, so I just came out.”

But Buttigieg acknowledged that at the time, he feared negative attention on the moment. “I had no idea what kind of professional setback it would be, especially because inconveniently it was an election year in my socially conservative community,” he said.

“What happened was that, when I trusted voters to judge me based on the job that I did for them, they decided to trust me and reelected me with 80 percent of the vote. And what I learned was that trust can be reciprocated and that part of how you can win and deserve to win is to know what's worth more to you than winning.”

“That's what we need in the presidency right now. We have to know what we are about,” he said. “…It's about the people who trust us with their lives, a kid wondering if we're actually going to make their schools safe when they've learned active shooter drills before they've learned to read, a generation wondering we will actually get the job done on climate change."

"And if we hold to that, then it doesn't matter what happens to each of us professionally," he continued. "Together, we will win a better era for our country.”