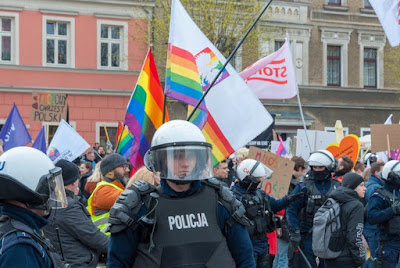 Riot police have tear gassed and arrested dozens of far-right protesters after hundreds tried and failed to disrupt an LGBT parade in Lublin, in eastern Poland.

Nearly 30 people have been detained so far after an estimated 200 counter-demonstrators attempted to block the route of the Lublin’s second ever march for gay rights. Balaclava-clad homophobes brandished banners likening homosexuality to paedophilia and reading “woe to him who rots in silence”, attempting to pelt marchers with eggs.

Around 1,000 officers patrolled the event, which attracted about 1,500 marchers in Lublin, which has a population of around 342,000. Shielded by a wall of riot police, marchers carrying signs promoting tolerance and personal freedom were able to safely conclude the parade as planned without any disruption.

The ruling Law and Justice party (PiS) has increasingly sought to stoke anti-LGBT sentiment in the Roman Catholic nation, painting “LGBT ideology” as an affront to traditional Polish values.

The prime minister’s adviser Jaroslaw Kaczynski has publicly urged citizens to resist the “travelling theatre” of Pride marches which he described as “a real threat to ... the Polish state”.

Despite warnings from campaigners that the government’s weaponisation of the issue could fuel hate crimes, PiS has made its opposition to “LGBT ideology” a key issue in its campaign ahead of parliamentary elections on 13 October.

Around 30 cities and localities have declared themselves “LGBT-free zones” this year, with one conservative newspaper distributing stickers printed with the phrase: Strefa Wolna Od LGBT (translation: LGBT free zone) . 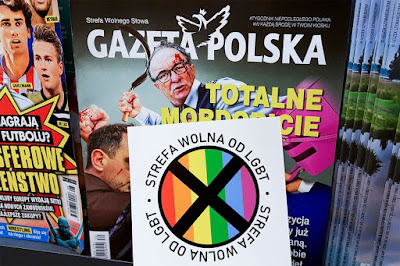