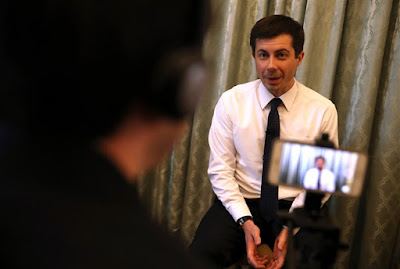 Titled The Only Way, the 30-second clip begins with an image of the mayor of South Bend, Indiana, in military camouflage (he served in Afghanistan with the Navy Reserve). "As a veteran, and as a mayor, I've seen what we can achieve when we have each other's back," Buttigieg says. "But in today's divided America, we're at each other's throats."

The mayor then describes the issues facing the country, like climate change, rising health care costs, and the fact that "our kids are learning active shooter drills before they learn to read." Buttigieg says we need "real solutions, not more polarization."

The campaign is spending over $200,000 in the next week and a half on the spot, which will air on TV and online. The mayor's presidential campaign has also opened 20 new field offices in the state and hired an additional 30 staffers there. Iowa's Democratic caucus will take place February 3, 2020.

Buttigieg is the first gay candidate to make traction in a presidential campaign, would win a general election against Donald Trump by nine points, the Quinnipiac poll shows.