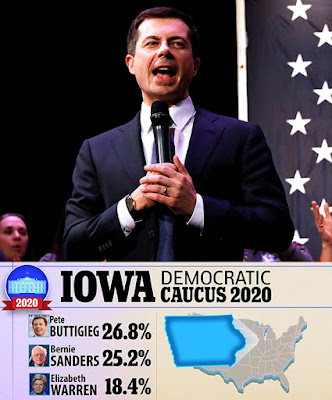 Democratic presidential candidate Pete Buttigieg claimed a measure of victory in Iowa, telling supporters at his caucus watch party that the state had "shocked the nation."

A Buttigieg win or top finish in Iowa would be historic, marking the furthest an openly gay candidate has come to securing a party's presidential nomination.

Buttigieg's potential strength in rural areas. During his campaigning in Iowa, he had tried to argue that he can bring in not only Democrats but independents and what he calls “future former Republicans.” He said that’s important in rural areas and industrial small towns where Trump had strength in 2016.

He declared: "Tonight’s results not only represent an astonishing victory for our movement, they validate the message of belonging that brought us here. If you believe that a new and better vision can bring about a better day, join us."

"With hope in our hearts and fire in our bellies, we’re going on to New Hampshire, on to the nomination, and on to chart a new course for our country," he added.

Jim Donchess, Mayor of Nashua, the second city in New Hampshire, endorsed Pete Buttigieg on Tuesday ahead of the state's presidential primary next week, citing the "unifying vision" of the former South Bend mayor's campaign.

"As a fellow mayor, I know firsthand that we don’t have the luxury of letting politics get in the way of what matters most, delivering for the people who depend on you. It’s time we had someone in the White House who understood that," Donchess said in a statement.

"As president, Pete will serve communities like Nashua because he comes from a community like ours, and he will bring the voices of working people from cities and towns across America to Washington," he continued.

New Hampshire, it is your turn to make History!!!