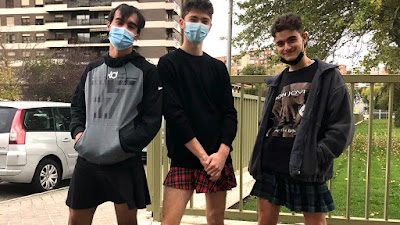 High school boys and girls have created a student movement against homophobia and to claim that clothes have no gender after the story of Mikel, a young Basque who was taken to a psychologist by a teacher for wearing a skirt.

The action arised as a result of a video that had gone viral where a boy told that he had been recriminated for having been dressed in a skirt to class and as a claim to fight against gender stereotypes. It was Mikel, a young Basque who reported that he had suffered bad looks and homophobic slurs for wearing a skirt to go to class. He narrates that even one of his teachers caught his attention and sent him to the psychologist for his way of dressing.

His story soon went viral and spread throughout Spain. Thousands of youth students from all over the country wanted to advocate for equality and, attending the call, have put on skirts to attend class. The networks were filled with videos of boys and girls wearing this garment to protest what they understand to be discrimination against gender equality and homophobia.

A group of students in Canada recently did the same. 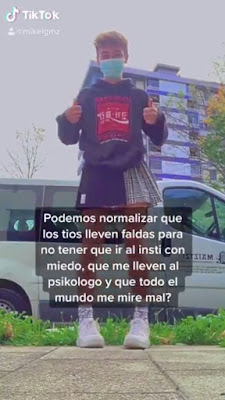