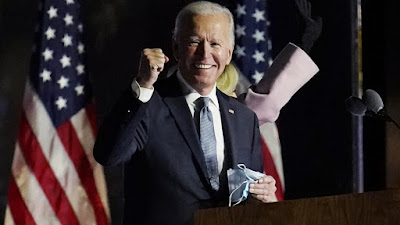 Addressing a jubilant crowd in his hometown of Wilmington, Delaware, the new president-elect declared it was now America’s “time to heal” and vowed to unify the nation once again.

He began by thanking the broadest and most diverse coalition in history for backing his campaign, including a shoutout to the LGBT community.

“I am proud of the campaign we built and ran. I am proud of the coalition we put together, the broadest and most diverse coalition in history,” he said. “Democrats, Republicans, independents. progressives, moderates, conservatives. Young, old. Urban, suburban, rural. Gay, straight, transgender. White, latino. asian, native American.”

“They always have my back, and I’ll have yours. I said from the outset I wanted a campaign that represented America, and I think we did that. Now that’s what I want the administration to look like,” he added.

Biden’s victory speech was a reassuring return to the professional, presidential rhetoric eschewed by Donald Trump, and a sign of his intention to be president to “all people”, including marginalised groups.

His words carried echoes of Barack Obama’s 2008 speech, which was the first time a president-elect had ever mentioned the gay community in an inaugural address.