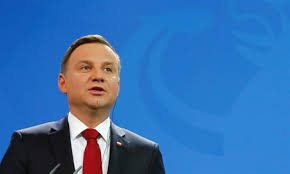 The President of Poland says same-sex marriage will never be legalised in the country, despite growing pressure from lobby groups and neighbouring European countries.

President Duda cited the Constitution when asked about the future of marriage equality in Poland: “I unequivocally repeat: marriage in accordance with the Polish Constitution is a union between a man and a woman”, he declared.

And he continued by saying: “I do not think that the political majority today would agree to any amendment to the Constitution in this area, water down this clause and open interpretation that marriage could also include other genders”.

Over one year ago, the European Parliament urged nine European countries, Poland include, to recognize same-sex marriage and protect LGBT rights.