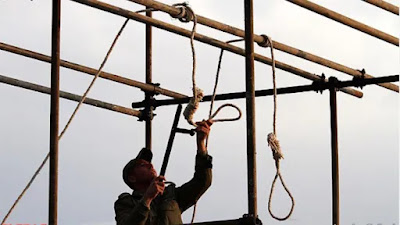 Two men, Mehrdad Karimpour and Farid Mohammadi, were allegedly arrested about six years ago for “sodomy by force,” according to Iran’s Human Rights Activists News Agency. The organization reports the two were killed in the Maragheh prison in northwestern Iran.

Iran, because of its discriminatory and criminal laws, is considered one of the most dangerous places to be gay. Under the Islamic Shariaa law practiced in Iran, same-sex relations are a criminal offence and the punishment ranges from flogging to the death penalty.

Iran’s regime frequently uses the charge of sodomy to impose the death penalty on gays and lesbians. According to a 2008 British Wikipedia dispatch, Iran’s theocratic state executed between 4,000 and 6,000 gays and lesbians since the country’s 1979 Islamic revolution.

The last crime was announced by journalist Karmel Melamed, who tweeted with images of the two men the following text: “The Ayatollah regime in Iran just executed two gay men for the crime of sodomy in Iran. This is Mehrdad Karimpour and Farid Mohammadi who were executed by hanging,” 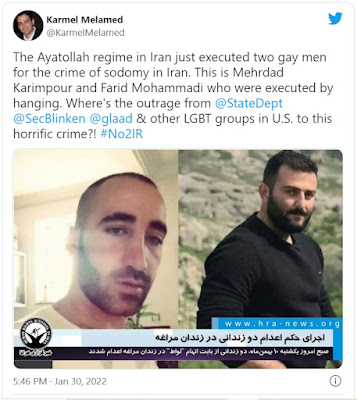