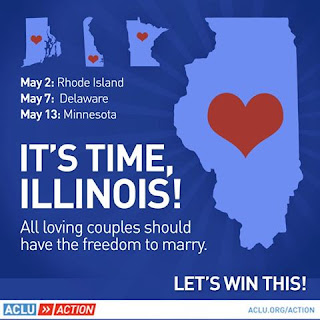 After Rhode Island, Delaware and Minnesota have legalized marriage equality, the next match would be played in Illinois where the same-sex marriage bill should pass in the House after state senators approved in February. But the legislative session in Illinois is near to conclude on May 31, and several issues, including gay marriage bill, remain unresolved.

Last week, in a very interesting post, Eddi Haskell announced that this bill could not become law for delay in the House vote. He rightly said: "Unless the bill comes to vote in the Illinois House of Representatives in the next two weeks and passes, the bill will die and the effort for marriage equality will need to start all over again". You can head over to Eddi Haskell's post.

Although Illinois is a predominantly Democratic state and Democrats hold a majority in the House, the true is that gaining passage of gay marriage has been difficult. Until recently, supporters believed that they didn't yet have the votes needed for passage.

However, last weekend, the Governor Pat Quinn was directly calling on the Legislature to solve this issue. "It's time to vote", he said. Yesterday, the advocates for marriage equality in Illinois told that believe they have the votes to pass the bill and are ready to do so. "I have absolutely no doubt we're going to be done with this by May 31," said Jim Bennett, Midwest regional director for Lambda Legal. And today, Greg Harris, the chief sponsor, said he will “absolutely” call a vote on the marriage equality bill by May 31, and “it’s going to win”.

Seems Illiniois is ready to become the 12+1 state to allow marriage equality. Let's win this! 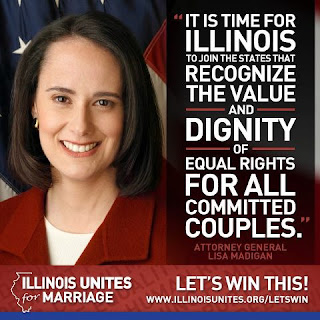