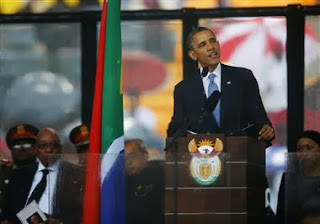 President Obama's speech statement at Nelson Mandela’s eulogy has been a call for equality around the world, also LGBT rights.

The U.S. president has defined Mandela as "the last great liberator of the 20th century", because "he changed laws, but he also changed hearts".

Shamefully, today being gay is illegal in 76 nations. There still is a very long way to go Mr. President.