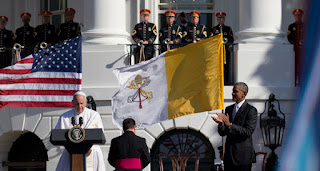 The White House ceremony welcoming Pope Francis went smoothly, and the presence of LGBT guests proved to be no problem, contrary to the dire predictions of conservative politicians and commentators.
The White House crowd of about 11,000 ticket holders couldn’t have been more polite. The guests included Gene Robinson, the first openly gay bishop in the Episcopal Church; Mateo Williamson, a transgender Catholic activist; and Sister Simone Campbell, a nun who has publicly supported the Affordable Care Act, which has been denounced by some Catholics because it mandates coverage of contraceptives.
The Pope said that it was right that the American society was tolerant and inclusive, but warned that American Catholics were concerned that efforts to build a just and wisely ordered society respect their deepest concerns and their right to religious liberty. That freedom remains one of America’s most precious possessions.
While the Catholic Church continues to oppose same-sex relationships, seems that Francis has changed the church’s tone toward LGBT people 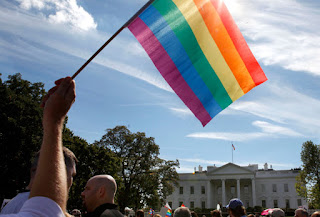