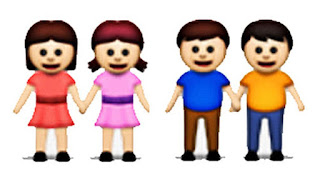 Apple is to be sued in Russia for gay propaganda over including the same-sex couple emoji in their most recent update.
Officials in Russia’s Kirov region are launching an investigation after attorney Yaroslav Mikhailov has complained the LGBTI friendly company is breaking the law. He argues that Apple is promoting gay relationships to children.
If found guilty, Apple could be fined up to 1 million rubles ($15,000), and the company could also be forced to suspend all activities across Russia for three months.