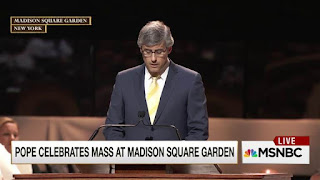 An openly gay man and supporter of same-sex marriage delivered the first Bible reading at Pope Francis’ New York City mass in a surprise move for the Catholic Church.
Former Daily Show correspondent and political satirist Mo Rocca was chosen to open the Pope’s mass at Madison Square Garden, delivering the first Bible reading of the evening as the event’s Lector.
Born to Colombian and Italian Catholics, Rocca attended a Jesuit boys’ school.
He came out publicly in 2011 in an interview with The Six Pack podcast at the age of 42 revealing that he had visited the site of the Stonewall Riots on the night same-sex marriage was legalized in the state of New York.
Following Pope Francis’ mass Rocca took to Twitter to express his thoughts, tweeting: "I am deeply grateful and humbled to have delivered a reading at a Mass celebrated by @Pontifex". 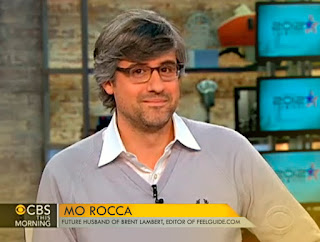 Rocca worked on The Daily Show to 2003,
and recently on CBS Sunday Morning