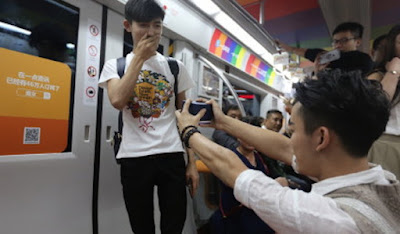 A new gay marriage proposal that took place on the Beijing subway has gone viral in China.
The videos posted on social networks show a young man kneel in the middle of a rainbow-colored carriage and propose to his boyfriend with a watch.
He then takes the watch out of its box and puts it on his boyfriend’s wrist, and they embrace to applause.
The happy couple are surrounded by commuters who filmed the proposal on their phones.
Early this year in China, a series of adverts urging people to be more accepting of gay people were launched on TV.
And a few weeks ago, a film about sex-same relationship passed censors and it will become the first gay film to show in Chinese theaters later this year.
In fact, a survey found that economically developed cities and China's southeastern coastal provinces are more gay friendly.
Maybe something is changing in China...