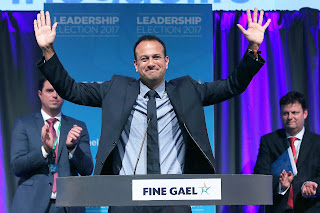 Leo Varadkar, the 38-year-old Minister for Social Protection, was elected leader of the ruling Fine Gael party, and he will be confirmed as Taoiseach, or prime minister, when the Irish parliament reconvenes on June 13.

Varadkar, the son of an Indian-born father and Irish mother, became a doctor before first entering Irish parliament at the age of 27.

In 2015, as Minister of Health, Varadkar came out on Irish national radio, joining a handful of other openly gay politicians in Ireland in support of the Marriage Equality Bill, which allows same sex couples to marry.

His partner of two years, Matthew Barrett, is a cardiologist.

Varadkar said: "If somebody of my age, of my mixed race background and of all the things that make up my character can potentially become leader of our country, then I think that sends out a message to every child born today that there is no office in Ireland that they can't aspire to".

That should be the usual. 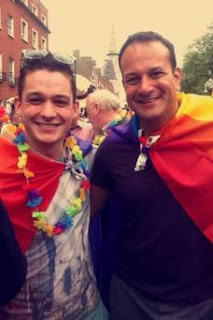 Varadkar and his partner at Dublin Pride Parade