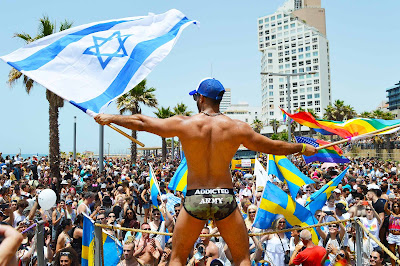 More than a quarter of a million people from around the world gathered in Tel Aviv on Friday to take part in the largest ever pride parade in the Middle East. The turnout this year was the biggest ever in the parade’s 20-year history.

The theme of this year’s event was “The Community Makes History,” in recognition of 10 years since the founding of the Gay Center in Tel Aviv, and 20 years since Tel Aviv’s first Pride Parade.

It's the biggest event of its kind in the region and draws people from around the world to party. Israel has emerged as one of the world's most gay-friendly travel destinations in recent years, in sharp contrast to the rest of the Middle East, where gay culture is often not tolerated and homosexuals are persecuted in some places.

Musical offerings included favorites from the Eurovision Song Contest over the years, a performance by longtime members of the LGBT community of "Golden Boy," as well as a drag show and an appearance by the Israeli Arab diva Nasreen Qadri. Eurovision winner Netta Barzilai also performed her song 'Toy' on main stage.